An historic and picturesque bed and breakfast in the quaint Village of Caledonia, Missouri.

Just in time for Halloween…

One of the questions we get asked a lot here at the Old Caledonian Bed & Breakfast is if our house is haunted. Our answer used to be that we have experienced some unexplainable things during our time residing in this home: strange noises, bumps in the night, etc., but nothing that unusual. But lately things are starting to become a bit more definitive…

When we first moved in to the Ruggles-Evans-Dent House in Caledonia, Penny experienced the first appearance of ”The Bearded Gentleman”.

Innkeeper Penny and her sister, Tracy, were in our second floor hallway arranging rugs between our Heather Room and our soon-to-be Massage Room (coming January 2020!). Innkeeper Jon had just gone off to Farmington for a run to the hardware store.

Now, Jon is big-ish guy with a large beard. He also has a habit of walking out the door to go somewhere, and then realizing he’s forgotten something and coming back in to the house for the forgotten item before leaving again.

As Penny tells the story, “I was moving one of the rugs, when out of the corner of my eye I saw this guy with a big beard walking up the steps to the second floor. I assumed it was Jon forgetting something, so I said, ‘What did you forget?’ and then looked up and whoever was there had vanished.”

For several months we simply thought it was a fluke; just one of those unexplainable tricks one’s brain sometimes plays. But then…

We had a guest check in who was by herself. She came down for breakfast the next morning and said to Jon, “I’m sorry about the scream. I appreciate your checking on me.”

Jon must have looked very confused. “I’m sorry? I mean, I didn’t…”

“Did I just dream it? I apologize if I woke anybody up.”

“I didn’t hear anything, are you all right?”

She explained that she was prone to night terrors, and had experienced one while sleeping and had cried out. She said the door had opened and a bearded gentleman she’d thought was Jon was standing in silhouette in the doorway.

“I said I was OK, and that I really appreciated your concern,” said the guest. Without a word, she said, the figure had shut the door.

Of course, Jon would never just open a closed door to an occupied room! In fact, Jon hadn’t heard a thing from his room on the other side of the house. Penny, Jon, and the guest talked about it over breakfast, and Penny mentioned to the guest that she had seen the Bearded Gentleman a few months prior. Was a pattern emerging?

A few weeks later, we hosted a big party with lots of people in attendance. The party organizer’s grandmother was standing next to the arm of the couch in the keeping room chatting with guests, near the doorway to the small hallway which leads to the dining room. Jon was at the desk across that same room, thanking guests as they were leaving the party. The room was crowded, and the desk was not visible from the grandmother’s vantage point.

Jon crossed the room to check on guests in the dining room, when he saw the grandmother do a double take. She had a look of shock on her face.

“You were just in this doorway,” she motioned toward the dining room, “I saw you out of the corner of my eye! You were right here just an instant ago!” 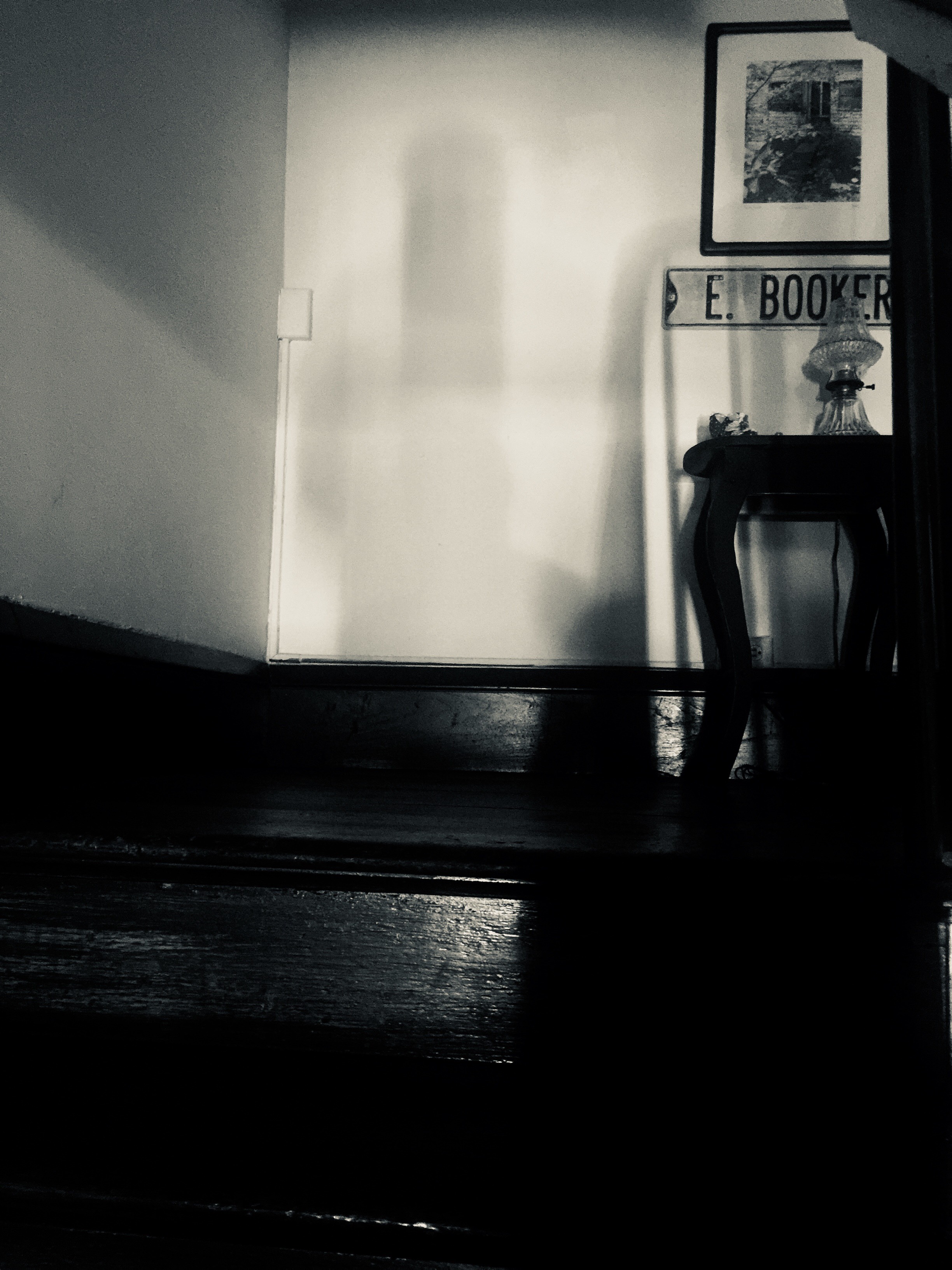 She pointed toward the desk at the other side of the room. “But how did you—I mean you were right next to me just a second ago.”

It sounded to Jon like the Bearded Gentleman is a fan of parties, because he seemed to be enjoying hanging out with the other guests!

Now, we’re not saying that there aren’t logical explanations for these appearances of the Bearded Gentleman; but if there are… What are they???

Book your stay now by clicking the button at the top of the page, and maybe you’ll meet our friendly “resident” too! Happy Halloween from the Old Caledonian B&B!

1 thought on “The Resident Ghost of the Old Caledonian”